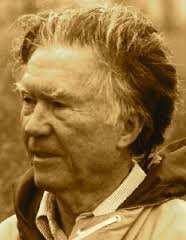 The last time I saw William Stafford, we were standing near a table at the Los Angeles Times Book Festival where Muhammad Ali, surrounded by a pressing crowd, was signing copies of his autobiography. We were both a little star-struck. Stafford had been signing at a table too. His crowd had been much smaller - “an occasional gathering of the faithful” is how he put it. A few years later, when he died, I thought (and wrote) about that day, about him, about how he sees it, and how he writes it.
I thought about him a lot today, too. All day, big tanker planes flew back and forth over my house en route to fighting the fires in the Sierra foothills. I thought of his time fighting fires as part of his conscientious objector work during WW2. I thought of his integrity, his practical way of seeing the world, of being true to it and willing to pay for that truth, and the little miracles he makes when he writes it down. He is down in MY heart, a frequent visitor who always offers clarity and a persistent gnawing to get to the meat of it.

Here is a favorite little poem of his:

They tell how it was, and how time
came along, and how it happened
again and again. They tell
the slant life takes when it turns
and slashes your face as a friend.

Any wound is real. In church
a woman lets the sun find
her cheek, and we see the lesson:
there are years in that book; there are sorrows
a choir can’t reach when they sing.

Rows of children lift their faces of promise,
places where the scars will be.

Bio: Patrick Grizzell is a poet, songwriter and visual artist. His books include Dark Music, Chicken Months (about which Robert Bly wrote, "... the poems have a sweet spontaneity and tenderness."), Minotaure Into Night (with sumi paintings by Jimi Suzuki), and the recently published chapbooks, 13 Poems, and It's Like That. He has a full length collection, Writing in Place, under way. He was a founding member and previous director of, as well as an editor for, the Sacramento Poetry Center. He has performed poetry and music with, among others, Allen Ginsberg, Leon Redbone, Gary Snyder, Jim Ringer and Mary McCaslin, Edward Sanders, Taj Mahal, Shizumi Shigeto, William Stafford, Robert Creeley and Anne Waldman. Grizzell studied art and literature at CSUS with Maya Angelou, Dennis Schmitz, Eugene Redmond, Kathryn Hohlwein, John Fitzgibbon, Jimi Suzuki and others.
Grizzell's  band, Proxy Moon, will release a CD later this summer. John Lee Hooker once said he "sound pretty good" on the dobro.
(Visit at LinkedIn/Patrick Grizzell, Facebook/ProxyMoon)