Jon Cunningham's Life on the Periphery 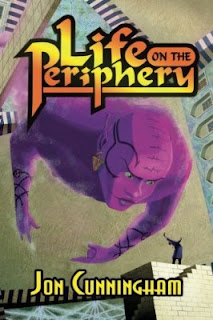 We live in the age of excess with a smorgasbord of literary offerings. This wasn’t the case when I was a teenage girl nerd devouring Asimov, Heinlein, Norton, McCaffrey, and Ellison between classes, and on the weekends holed up in my room while I ignored my chores.
These names ring true in the halls of my personal literary mythos, and now, there's millions of writers who publish and make their work available to the almost seven billion people on the planet. That’s a lot of material - and chaff - to sift through. Contemporary authors like Neil Stephenson (Seveneves), Megan Elison (The Book of the Unnamed Midwife), Chuck Wendig (Under the Empyrean Sky), Lev Grossman (The Magician Series), Sofia Samatar (A Stranger in Olondria), and Becky Chambers (A Long Way to a Small Angry Planet), are some of today’s modern masters of scfi/speculative/fantasy. There are also unsung masters who quietly write for the sheer pleasure of their craft, and one of them is Jon Cunningham, with his debut short story collection, Life on the Periphery (© 2016 Sybaritic Press).
Life on the Periphery contains nine stories (or six short stories/three novelettes), that span the gamut of hard science fiction: “Think of England”, an unexpected story about first contact; to speculative, in “Für Wissenschaft!” a cautionary tale about monstrous transformation in the most unlikely place; to light fantasy in “His Cooks, His Bakers”, a feminist hero’s tale retold in the tradition of Ali Baba and the Forty Thieves. Cunningham, an artist and filmmaker, brings his visual storytelling gifts into a literary gem that is both delightful and thought-provoking. There’s something here for anyone who loves quality literature, and who can appreciate the fusion of old school/new school tropes in scifi/fantasy.
The intimate narrative tone of Cunningham’s prose, which, while isn’t first person, drops the reader right into the landscape of each story with the sense that they’ve been there all along. And there are no apologies or punches pulled in Periphery, which is punctuated with erotic undertones and graphic scenes of horror that, thanks to Cunningham’s cinematic background, rise full-fledged within the mind’s eye, as in the short story “Join Us For the Coming Feast”, a disturbing and acutely uncomfortable new take on alien invasion:

Charlotte shrieked. One of them slammed into the window, grasping the frame with its talons. It was big, over seven feet tall, covered in a short black-ish brown fur. It was thin, yet muscular. Its arms were extended into long, leathery wings; that flexed as the creature struggled against the glass. Its head was tall, sharp pointed ears over a screaming jaw. It had a pig’s nose and a shark’s eyes. It had a manic, frustrated manner, unable to understand the nature of the barrier keeping it out of the offi ce. It was staring directly at Dave, and he came to realize it was not looking at him in anger. It was looking at him with hunger.
I’ve always admired and championed the outliers in literature, and Life on the Periphery definitely falls into this category, though I suspect, not for long. My advice: read Life on the Periphery with an open mind, the lights on, and during the daylight hours… and then, try it again at 3 am with a flashlight, and alone in your house…  you’ll not forget one word. Not one.

Posted by Marie C Lecrivain at 9:45 AM