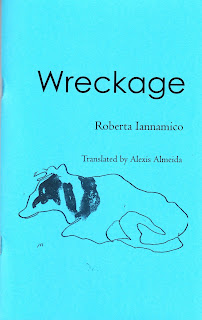 Translated poetry is a fascinating, and sometimes risky venture, but one that offers the chance to read work by other poets who were previously inaccessible.
The art and success of translation primarily rests upon the translator. We may prefer one translation of Rilke, Neruda, or Akhmatova to another, and each new translation is hailed as an original and fresh way of accessing the poet's work.
The industry publishing standard for translated poetry is to include poems in their original language, alongside the translated work to gain an appreciation of the poet's message, the labors of the translator, and possibly, to acquire a unique insight from the nuances of reading poetry in dual languages. That standard's thrown out the window with Wreckage (© 2017 Toad Press), a chapbook of poems by Argentine poet Roberta Iannamico, and translated by Alexis Almeida.
I was curious as to why Wreckage was published only in English. As an avid reader of poetry, I've grown used to, and made it my preference, to read poetry collections that include both languages. Wreckage, on its own, is a compact chapbook of simple, beautiful poems with imagist influence that draws the reader into the present moment (also, throwing out another standard; that poetry should have a timeless quality), of highly personal, as well as universal experiences.
Half the success of Wreckage can be attributed to Almeida, who, as a poet, and editor, has shown a great deal of respect and affection for Innamico's work. The poems in Wreckage are translated well enough so the music of the poems come through without a loss of meaning, as in the poem "The Cartwheel", pg 21:

When I was a girl
I didn't know how to do a cartwheel
when I brought my arms to the ground
I didn't dare
lift up my legs
I kicked lightly
like foals
as for the other girls
they all did cartwheels
some of them could cross the entire yard
doing one cartwheel
after another
they were stars
turning
turning
in the moment when your head is down
and your legs draw
a compass' circle
your hair braises the floor
like a broom of silk
when you come up from the cartwheel
you have to rest your eyes
a few seconds
I was older when I learned to do it
in the 6th grade
I practiced in secret
I cried in secret
at once I knew
something obvious
something natural
like the first time you understand
how to float on water
you don't have to do anything
my open body
was flying over
the surface of the earth
a brief contact
with each
of my four points
one more flower
in the spring air.

Iannamico's poems cover a variety of personal vignettes ("Road", "Evening"), wishes ("Birthday", "The Panda Bear"), and humorous anthropomorphic observations ("Vegetable Stand", "Porcelain Doll"), and, thanks to Almeida's efforts, no words are wasted, as in my favorite of Iannamico's poems,  "I Said Goodbye" , pg 12:

In the end, there's no reason to publish a dual language version of Wreckage, and this may become the new standard for translated poetry. However, if you're curious to read the original poems alongside their translations, you can do that here.
We live in a world where the barriers between languages are fast falling away, due in part to globalization, technology, and, or course, the Internet. Enjoy Wreckage for the beauty of the poems, and for the commonality of experience.