This Memorial Day, remember me. I fought twenty-two years in a different war. Local bars and the scene of social tragedies were my front and an AT&T cell phone was how I was radioed into battle, night after night after night.

Everyone had my number stored and they all knew my rank. They’d memorized my name, or some version of it (Matt Cab, Cab Matt, Taxi Matt, Matt Taxi – however they stored it in their cells), and honored my loyal service, year after year.

Night after night as drama struck - and it struck often, I’d be pulled away from another hot meal, another hour’s sleep, another family event. I believed they’d called me specifically, not any other random driver, perhaps out of loyalty but definitely out of need. Everyone needs a friend when they’re hitting rock bottom.

This Memorial Day, remember the friend who always showed up for the pivotal moments in your life, and pulled you out of a few that almost turned tragic. The next time a ride share driver refuses hands-on help in any given situation, remember who used to pull you out of the bushes, held your rings as you dove into a fight, handed his ID to the cops and said ‘I’ll take him straight home.’

This Memorial Day, think of me as you tap on an app. By doing it, you’re voting with a collective voice to announce that my years of sacrifice and loyalty were just fine.. but ultimately aren’t enough. When you tap, and see a price that’s below mine, know that it is the death knell to a way of life that once served us both very well.

After 26 years in the car sales business, my friend Jill retired last weekend. “Nine out of ten people who come into my showroom say ‘thank you very much’ then go buy a car somewhere else.” Ninety percent of her daily labor has been spent educating the car-buying public so they can then tap on an app, and buy a similar car cheaper someplace else.

For years, people have been calling to price shop. One woman I’ve known twelve years called last Wednesday; my price was $4 higher than her app. After twelve years of friendship, she went with.. the app. She still had the gall to call me from the backseat of her ride to ask what places in town were hopping.

This Memorial Day, remember Captain Save-a-Ho. Because starting this week, you’re going to see one less taxi on the road. You probably won’t notice as you’ll likely be burning a stare into your palm, and the car he’s bought looks like almost any other on the road. And in accordance with your preferences, he will no longer leave his driver’s seat to help you.

His new car is comfortable, air conditioned, and doesn’t smell of 400,000 miles of sweat and bodies. He’s enjoyed his vacation, but now it’s time to join the ranks. And he won’t feel like he’s leaving anyone behind.

That was already done years ago. 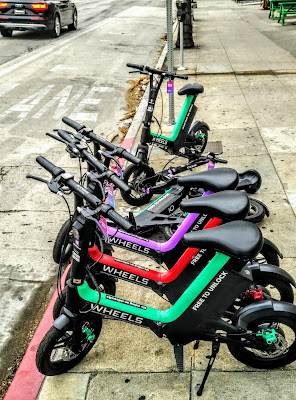 
Bio: Matt McGee writes short fiction in the Los Angeles area. In 2019, his work has appeared in Biograph, Gnashing Teeth, Otherwise Engaged, poeticdiversity: the litzine of Los Angeles, and his story ‘The Rebirthing Shed’ will appear in Zimbell House’s 1929 anthology. When not typing he drives around in a vintage Mazda and plays goalie in local hockey leagues.
Posted by Marie C Lecrivain at 10:07 AM