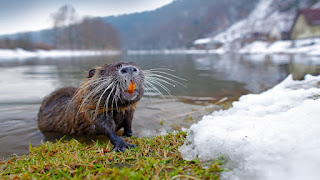 last night, the nutria in the river interrupted

my contemplation of the swooping little brown bat’s

i wanted to stand on the bank and watch bat skim

until night blended her completely in.

but the nutria swam a little past me, then circled back,

slapping her tail hard as she dove, then swam further off and back again

to the small clearing i had climbed down to, repeating herself

until i grasped my unwelcomeness and knew--

looking down at my smooth, bare legs--

i wanted no part of any battle. so i climbed back up the dike,

today, i learn of the campaign

to trap and euthanize nutria and how aggressively

they bite and scratch. in my mind, the guinea pig ears

and upturned nose ride above the current, comical profile

unaware of the danger i might pose or knowing

that she has the better of me.

Ann Tweedy's first full-length book, The Body's Alphabet, was published by Headmistress Press in 2016. It earned a Bisexual Book Award and was a finalist for a Lambda Literary Award and a Golden Crown Literary Society Award. Ann also has published three chapbooks: Beleaguered Oases (2nd ed. Seven Kitchens Press 2020); A Registry of Survival (Last Word Press 2020); and White Out (Green Fuse Poetic Arts 2013). She currently serves as a law professor specializing in the laws relating to Native American Tribes. Read more about her at www.anntweedy.com.