"The Angel of Salonika," by Vesna Goldsworthy 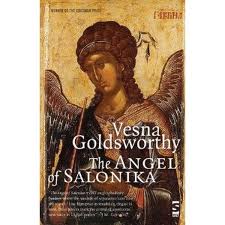 I'm not in the habit of reviewing older titles, but, after ordering VesnaGoldsworthy's  The Angel of Salonika (© 2011 Salt Publishing/winner of the Crashaw Prize), I'm happy to report that my decision to read, and then review this gorgeous little poetry volume was the correct one.

Goldsworthy, a Serbian poet who grew up in communist Yugoslavia, and, later, emigrated to London, has captured and chronicled the themes of love, loss, memory, and rediscovery that originated from a summer spent in Greek Macedonia (“Salonika” is an ancient name for Thessaloniki), thirty years previous.

Salonika, as Goldsworthy notes in her afterward, is a cultural gateway to The Balkans; this is the perfect backdrop for Goldsworthy to set up a dual travelogue; the outward landscape mirrors the poet's internal journey. The poet is often in the act of departing for other places (“Departure Board,” “Germany”) or, saying farewell to a loved one/times past (“Notebooks,” “Yugoslav Noctures”). The best poems, in my opinion, are the ones where Goldsworthy engages in the act of transformation; her own, while at the same time, acknowledges the transformations of those persons in her life who no longer fit the familiar boundaries the mind employs to solidify relationships, as in the poem, “He Stands so Thin and Waits”:

I take my spectacles off
Before the ink line of his limbs
Emerge from the crowd
Before the smile closes his eyes
Below the clock at Waterloo
Half way between
A Giacometti and a Meissen Chinaman
He stands so thin and waits
Yet I am the fragile, the much sutured one
This time, shall we...
His question bleeds
Into the departure
Of the one forty two
For fear of being early
I am the one who is late
Who takes the last few steps
Like someone who hasn't walked before
But how are you, I ask
And hold his hand for a moment
In what I hope feels like a handshake
We do not touch
Thereafter
We do not touch

I'm not often bowled over by a poet's use of language (in this case, English) that's not written in their native tongue. Oftentimes, poets for whom English is not their native language rely on the help of translators, or, spend a great deal of time carefully constructing poems that are burdened with layers of scholarly formalism. That can't be said of Salonika. Goldsworthy has transformed the guttural soul of English into something finer, more lovely than English has a right to be, yet, her poetry is immediate and accessible, as in the poem “Out of the Blue”:

The Angel of Salonika, as a travelogue, and as a first collection of poems written in English by Vesna Goldsworthy, deserves a permanent place on every reader's shelf.