Review of In the Pink: Short Stories by A.D. Winans 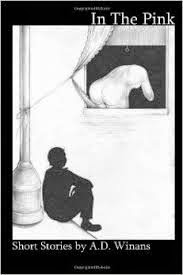 Writing a review about a collection of short stories from another era is daunting, but in the case of A.D. Winans In the Pink: Short Stories by A.D. Winans ( © 2014 Pedestrian Press), it needs to be done for the simple reason that history repeats itself, and literature, especially the personal narrative, can provide us with a better perspective on how to navigate tumultuous times successfully, either the second (or third) time around.

In the Pink recalls the 60’s Sexual Revolution, specifically in North Bay area of San Francisco. This time in history, of course, has been documented ad nauseum in film, art, and books to the point of overkill.This can’t be said about In the Pink, which slowly and almost deliberately peels off the rose-colored glasses that were synonymous with “free love,” and “peace.”

For every action there is an equal and opposite reaction, which Winans’ deftly reminds us in his straightforward, dark prose. The dawn of the American Sexual Revolution spawned a seamier side rife with the following: fetish exploration - along with a creepy touch of magical realism - in “Night of the Living Dildo”;  the up/down sides of anonymous sex in“Notes from a Crazy”; and unrealised desires that come to the fore in a sexually charged environment, as in “The Masseuse.” Winan’s characters are three-dimensional people; they are your neighbors, they are your family, imbued with equal amounts of loneliness, compassion and depravity. Winan chronicles these vignettes in simple and graphic detail, as in the story “Hotel Entella,” a tale of two lost souls, an unemployed writer, and a lonely widow, who, out of a reluctant need for intimacy, culminate their strange partnership with the truth laid bare:


She unlocked the door to the house, and escorted me into the living room taking off her coat and hanging it in in a nearby closet. She motioned for me to take a seat on the couch. She paused at the fireplace, and pointing to a painting on the wall. She said it was a portrait of her former husband.

“He was a kind man,” she said. “But he wanted a child in the worst way.I’m barren you know. I sometimes think he died prematurely because of this. He liked oral sex, but I denied him that too.I was such a prude in those days. He looked a lot like you when he was younger.”

I got up from the sofa and let her lead me into the master bedroom, It was a graveyard, total darkness. My eyes strained to adjust to the pitch-blackness. Even the bed sheets were black satin. I could hear the rustling of her clothes falling to the floor, and quickly joined her naked on the bed.

Almost immediately she settled herself down between my legs, resting her face on my navel, her hot breath stirring my passion. She stopped just short of my groin.

I reached over to the opposite side of the bed, and was startled to find a flesh-like object in my hand. It was a two-foot doll with child-like flesh.

“Please,” she said, take it in your arms and hold it.”

I felt awkward, even a little sick to my stomach, but felt I owed her this small favor. i picked up the doll and cradled it in my arms. She instantly went wild. Her teeth scraping against the head of my cock. moaning hungrily as she tried to work it deeper down her throat.

I did as she told me. The sounds hit the wall like a Mack truck. “Ma-Ma.Ma-Ma.”


In the Pink also contains an excellent mini-novella, “Straws of Sanity,” a cautionary tale that spells out the end of democracy and inter-personal relationships in the modern era. I would strongly encourage people to seek out and read In the Pink, if just for the last story. As I mentioned before, personal narrative, or, in this case, creative non-fiction, can serve as a valuable tool to avoid repeating history’s mistakes, like depersonalizing sexual intimacy, and treating people like commodities. It’s been 50 years since the official era of the 60’s began, a time of throwing off the barriers to embrace the possibility of a new world order - which is sort of like the times we live in now - and thankfully, we have good literature to help us guide the way.