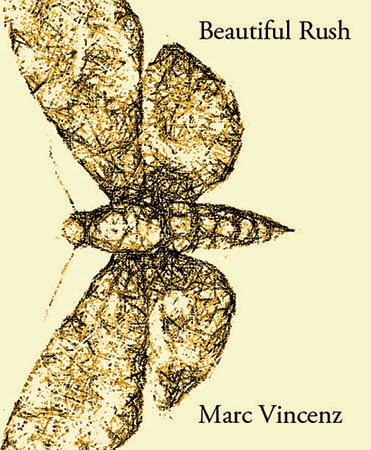 Author/journalist/translator Marc Vincenz has been lauded across the board for every poetry collection he's produced, and the accolades spill over into his fifth collection, Beautiful Rush (copyright 2014 Unlikely Books), which has been described by his poetic peers as “spellbinding,” “one of the finest poets of his generation,” and “hard-won and believable.” With those kind of credentials, one might either be too intimidated or too turned off to read Vincenz's latest literary offering.
Don't let the tsunami of praise dissuade you. Beautiful Rush recounts one brave poet's journey into “terra incognita,” that unknown territory that is humanity's deep well of shared unconscious. On the surface. many of the poems in Beautiful Rush come off as decisive moments captured in time, ala an Henri Cartier-Bresson photograph. But there is so much more going on in every one of these gorgeous poems. Vincenz, with an adept combination of contemporary language and classic archetypes, pulls back the veil of ubiquity to show the reader - through a poet's vision and voice - the strange, beautiful worlds and wisdom within ourselves we choose not to acknowledge, yet need to recognize for our own survival, as in the poem “Cassandra's Smoke”:

That foul breath of the city
waters the eye,
but the nose,
self-assured, carries on—

embracing whatever
comes its way:

in puffed up storm clouds,

Still,
the megaphone urges you to waltz
to pass the long-short-long time

in a park,
where old fools battle
crickets and compare
bird feathers,

where dogs shit and rut,
where artists seek the ears

of trees and pansies

and behind closed rooms,

In reading Beautiful Rush, Vincenz's choice of archetypal delivery, aka Cassandra, the doomed prophetess of fallen Troy, is particularly well-chosen. Cassandra was a priestess of Apollo who was endowed with the gift of prophecy, but was doomed to never be believed. Throughout Homer's Iliad, Cassandra's repeated fervent warnings are rejected by her fellow Trojans, who dismiss her as insane. Much to their collective folly, they paid the ultimate price. Vincenz, in the role of Cassandra cum poet, outlines the visions of a 21st Century world at a crossroads, one that would do well to listen to the warnings lost amidst the increasing noise of technology and progress. And in this, Vincenz-Cassandra not only serves as a means of prophecy, but as a guide and a vehicle of rebirth/reaffirmation of identity, as in the poem, “Cassandra's Level-headed Company”:

Knowing the stars
gave her a sense
of reality.

Knowing less
than what she knew
others had, gave her
a sense of place.

She needed means
to believe
and to doubt.

And through a riddle
when in doubt,
when standing alone
at rebellion,
even careless
wisdom had to go.

To be one
of the lingering
‘wicked’ ones,
to be sealed
in an icy fate.

What is it really
to be honest?
I choose
what governs
the syntax
within this level-headed
company.

We live in a world that, for all intents and appearances, is on the verge of repeating its most heinous historical mistakes. Marc Vincenz, with his book, Beautiful Rush, has provided an essential road map to navigate our way through an increasingly unknown and troubled time.