computers
I discovered you in 1965
you were eighteen and I was twenty-three
I felt like I had stumbled into a Norse doom
doom was what the Norse called fate
so it didn't have the grisly connotations doom has in English
but computer languages were like riddles, like puzzles
and I was asked to learn them, make them mine
then tease computers into solving problems we'd invented
how fast would a rocket climb?
how fast would fuel boil away?
how much fuel would a rocket need to...
oh!  I felt like a wizard solving those
and thrilled to take on the next ones
how does the spacecraft aim its camera?
and keep it from pointing at the sun?
and later how to use what we knew of gravity
to turn nothing more than doppler sounds
into probable locations of the spacecraft
it wasn't magic but it felt that way
and, better than magic, it worked
ah, computers, that was the trick of you
whatever we programmed you to do, you did
and that let us map the surface of the moon
and plan the trip to Mars and later Jupiter
the world was good then
I could and did forget Vietnam
Central and South America
it was just that one day when I looked up
the magic failed
I was a little tool in a big box of tools
and we were busy fooling people that we were doing good
we were the curtain the man used to disguise his tricks
and once the curtain began to tatter for some of us
soon it tattered for too many
and people no longer wanted to pay for the curtain
or for the man behind it
but by then he'd made himself indispensable
he and his minions swept away the shreds and bought a new curtain
velvet instead of linen
and it still works today
when Vietnam has become Afghanistan, Iraq, and whoever else we add
the man behind the curtain is busier than ever before
and I have lost the ability to see how he spreads good works
as well as so much misery
come on, Oz-makers!
weave us your spells again! 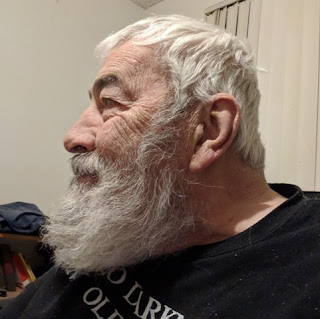 Wyatt Underwood has been participating in the Los Angeles poetic communities since late January 2010.  He has published six books of poems and has had a collection of his poems published by World Stage Press.  He co-hosts or hosts at three sequences of open mics - at the Encino - Tarzana Branch Library, at the Westwood Branch Library, and at Beyond Baroque in Venice.  He participates at maybe a dozen other sequences of open mics scattered around Los Angeles.
Posted by Marie C Lecrivain at 9:22 AM