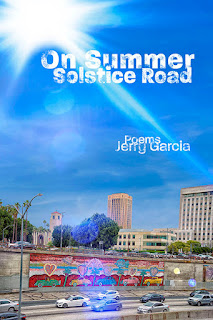 I can’t think of enough good things to say about Jerry “Grateful Not Dead” Garcia, so, I’ll stick with the facts. Garcia, among his many accomplishments, is an L.A. native, a multidisciplinary artist, and one of the finest poets Los Angeles has ever produced. His poetry is magnificent, cinematic, and unforgettable. His first collection, Hitchhiking With the Guilty, is a must read for anyone who wants to become familiar with seminal L.A. poetry, and his second collection, On Summer Solstice Road (© 2016 Green Tara Press), is a long time coming, much to the delight of myself, and many who have been waiting for his next poetic masterpiece. As a multimedia artist, Garcia has also embedded a series of QR codes in his new collection that “link selected poems to short poetry films that can be played on a smartphone or tablet. “(via Grateful Not Dead website).

Garcia was kind enough, between work, writing, and gearing up for the book launch for On Summer Solstice Road, to answer my questions regarding his new collection, and his own artistic process.

1) This is your first poetic collection since Hitchhiking With the Guilty. What inspired the inception and creation of On Summer Solstice Road?

JG: On Summer Solstice Road is a collection of poems rooted in mid-twentieth century America and expands from that era of disruption and exploration. I had seen my parents fretting over the possibility of nuclear war, I saw a president and his brother assassinated and riots  spring up in my home city. I also saw the popularity of television, the rise of rock and roll, especially the Beatles and men walk on the moon. Over half a century later upheaval and terror, mixed with rock and roll, are still watchwords in society; so my poetry strives to balance stories of evolution, redemption and hope.

2) On Summer Solstice Road is set up in four parts: Exposition, Context, Passage, and Re-entry. This, of course, implies a poetic journey for the reader. What are the reasons behind this particular arc, and what message do you hope the reader takes away after reading your new collection?

JG: I spent my childhood fearing the bomb, was a teenager during The Summer of Love and studied film-making at a Catholic University during the Watergate Era. These are the circumstances that inform my writing with references to pop culture and mid-20th Century history.  I'd like to see the reader find his intersection of ideals and perceptions with those offered in my poetry.

3) Your poems document the changing landscape of Los Angeles in a fundamental and heartbreaking way, particularly, the poem "Interstate 60", which describes the destruction of your childhood neighborhood in the name of automotive progress. What are your thoughts on the role of poet as historian/witness to history, and is this necessary to the evolution of poetry? Why/why not?

JG: That is certainly how I chose to write the poetry in this collection.  I like that Michael C Ford calls me “a firebrand observer of urban grit” because it sounds like Carolyn Forché's “poetry of witness.”  But  I don’t think it is necessary to always be an historian or witness to write meaningful poetry and not all poems need to be “meaningful.”  One might ask if a poem is articulate with a good cadence and color, how can it go wrong? Well, to answer my own question, a body of work would be pretty boring if it were all just for fun.

4) You've worked for many years in a visual medium as a filmmaker/photographer, and no more is it apparent than in the gorgeous imagery in On Summer Solstice Road. How does your visual art influence your poetic process?

JG: I like to think that I can exchange one for another.  When my day job kept me busy working on other people's creativity as a film editor, I learned how words could be used to put images on paper as it was not possible to shoot photographs in the absence of light. Ironically, I have now started making short art films using my poems as scripts.  Some of these films can be seen by scanning the QR codes on certain pages of my book. 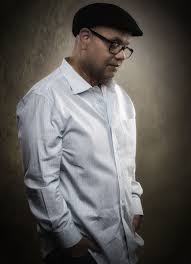 5) Some of your best poems "Lupe", "Pochismo Me", "Memory Preserved in a Blue Ceramic Ashtray", "Benediction", and "Lexicon", could be described as confessional, but there is an earnest tone that keeps it from falling into the confessional category. Would you agree with this assessment, and if so, why/why not?

JG: I never think of myself as a confessional poet though I like to make use of personal history in my work. Most poems I write about childhood, coming of age or failed attempts at love come from within the writing process itself.  Like the case of "Memory Preserved in a Blue Ceramic Ashtray"  that poem came from a workshop exercise where I stared at this inanimate object and envisioned a story starring a composite of ex-lovers and a particular incident.

6) Your poem "War Without My Heroes" is a summoning of some of the greatest luminaries in history (Diane Arbus, Edward R Murrow, John Lennon), to come back and fill the present day void that is our real/virtual reality. Your stanza,

is a clearly a warning that the days of art and poetry may be numbered. What advice would you give to present day poets and artists to make their words and images survive an entropic onslaught?

JG: Just keep creating. Strive to instruct, entertain or baffle. You may not be heard globally, but just going through the process to put that energy into the ether supports the cause.  Oh and avoid cliché, triteness and over-sentimentality. (I guess those are three words that mean the same thing.)

7) You've worked closely with Laurel Ann Bogen, and cited her as a direct influence on your work. What other poetic influences have shaped you into the poet you are now?

JG: Ah, yes. Laurel Ann Bogen taught me how to put a poem together and she inspired me to pursue that skill. She introduced me to the greatness of poetry and to the “greats" of poetry. She introduced me to Michael C Ford who has acted as mentor, editor and promoter. He introduced me to the work of Patchen and Carver who gave me a “grown-up” perspective. I never met Ferlinghetti but would like to think he and I would have great ‘woodshedding’ sessions. Then there’s Billy Collins for sentimentality-laden irony, Philip Levine for grit,  Carolyn Forché for her “poetry of witness” and ee cummings, for the way he pictures a poem on the page.

8) Your poem "How to Bury Your Dad", is a humorous, beautiful, and loving last will and testament as to how you want your remains to be interred, and with the hope that your daughters will grow stronger and closer together from the experience of your parting. What prompted you to end On Summer Solstice Road with this particular poem?

JG:First of all, thank you.  I couldn't have explained it better than you just did.  This poem describes the end of a journey and the beginning of a new one which is right where I wanted to leave the reader.

9) Many authors described feeling disconnected/divorced from their completed books once they are published. What are your feelings on the completion of On Summer Solstice Road?

JG: My feelings are mixed because I may never revisit these poems; they are now part of a book that will sit on a shelf to get sold and read and sit on another shelf. I does seem like a child who has left home. Now I want to package a new set of poems. You know, let’s go! On Summer Solstice Road is a compendium of experiences. Perhaps my next collection of poems should focus on the sensations during the experiences themselves.

10) You've got some appearances coming up in the next couple of months. Where will you be performing, and where can people purchase a copy of On Summer Solstice Road?

JG: The official book launch was on October 16, 2016 at Beyond Baroque where you can purchase the book in the Scott Wannberg Book Store.  It is also available at Amazon.com. Future readings will take place at the Studio City Library, Malibu United Methodist Church, The Second Sunday Poetry Series in Universal City and I’ll be leading a workshop at the Pasadena Library in December.  Dates and times can be found on my website www.gratefulnotdead.com.

Posted by Marie C Lecrivain at 8:43 AM