So many grievances,
So much injustice.
It’s like too many holes at once
Opening in the ceiling.
You run all over the place,
Trying to plug the leak.
You don’t have enough fingers.

Don’t let anyone tell you
You are not doing enough.
You alone will not be able to build the ark.
But your hammer will drive in one necessary nail.
It will be enough
If there are enough of you
To wield all the hammers. 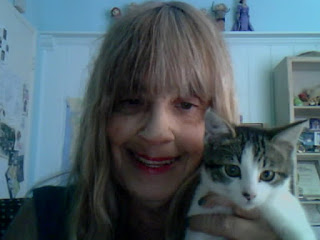 Lynne Bronstein came to LA in the era of album rock and wrote for the underground Los Angeles Free Press. For five decades she’s supported herself as a journalist while contributing to the literary community with four books, poems and short stories in numerous magazines, readings, and organizing poetry events. She has been nominated for the Pushcart Prize and the Best of the Net Awards and her short story “Why Me?” won a prize in the poeticdiversity Short Fiction Contest. She has poetry forthcoming in Lummox, Chiron Review, poeticdiversity, and Sparring With Beatnik Ghosts, among others.
Posted by Marie C Lecrivain at 10:01 AM