Vacation in Pompeii: gardens, wine and statuary --
Roman leisure at its best. What we see, though:
dead, immortal. At some point here in Southern

California, we'll have a devastating earthquake.
Where I live, there's plenty that could fall on me
and on my husband, cat, neighbors like the man
across the street who's mentally disheveled, occasionally
raving -- usually simply wants us just to give him something.

This is my neighborhood, my home, exactly what Pompeiians
had, along with gods like Dionysus who brought them grapes
and theater. A mosaic of a woman shows her slightly open
mouth, as if she wants to say how much she relishes the necklace
that she's wearing -- beads carry a jeweled cluster to her throat.

Hundreds of years from now, I hope our private histories will have been
written on retrofitted walls which last beyond the quake. I hope my story
mentions Robert, born to madness, and the couple in the next apartment,
Daniel and Lindsay, who are getting married in a month. Let us write
ourselves as difficult, devoted, loyal about love: Pompeiians put their arms

around each other as they died. The necklace and the slight embroidery on her dress weren't saved, but when I look at her -- this Pompeiian soul -- here she is, looking

right back at me. Everybody has a chance at immortality when there is no escape. 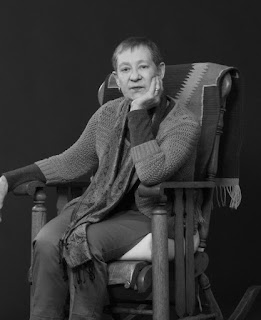 
Bio: Holly Prado has had twelve books published, primarily poetry and prose poetry, but also a novel, two novellas, and a book of short autobiographies. She's the recipient of the 2016 George Drury Smith Award for Outstanding Achievement in Poetry, given annually by Beyond Baroque Foundation. Along with her husband Harry Northup and poets James Cushing and Phoebe Ozuna, she's a member of Cahuenga Press, a poets cooperative publishing press, now in its 26th year.

Posted by Marie C Lecrivain at 7:01 AM