Shaindel Beers' The Children's War and Other Poems 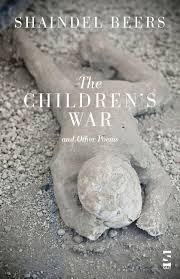 This is the end of the innocence – Don Henley

Part of the poet's “job” description is to record historical content – and Shaindel Beers' The Children's War and Other Poems (copyright 2013 Salt Publishing), chronicles the loss of innocence through war's violent variations: internal/external genocide, person against society, person against themselves.

The Children's War, as its title promises, provides the reader with a series of brutal ekphrastic poems that successfully extrapolate the annihilation of innocence through children's eyes, either through drawings/paintings made by children who've survived war, or photographs taken of child refugees. As no one, (at least a normal person), reacts to a child's pain without a mixture of anger and discomfort, the first half of The Children's War is almost impossible to read. Beers throws down the gauntlet: though the language is spare - like a child's - the feelings, the emotions, the empathy stirred within the heart of the reader - are not. There is a primal, raw power in Beers' poems, which can't be circumvented; the reader is put on the spot as a child's pain and loss take center stage, as in the poem “After Martija's Watercolor, Croatia”:

There are things that can happen that you can't draw.
A soldier ripping off the baby's diaper and slamming him
in tot he wall because it will be easier if the baby
cannot cry. Your mother without a head. Your paint splotches.
Green and blue are peaceful. That was before.
Now, everything is red. The red mixed with the green
becomes a sickening brown. The brown that covered
your thighs when a soldier was done with you.

The second half of the book “Other Poems,” continue on with the same theme, but on a more universal scale; loss of innocence through love betrayed (“Love Poem for the Other Woman'); the discovery that one's parents are human after all (“Origins”); the loss of childhood talismans at the hands of bullies (“Ode to Plastic Ball and Bat”), and the loss of one's passion (“The Last Ballet Class Before the Operation). Beers narrative tone lightens – somewhat - in the second half of The Children's War, yet, the poems are just as compelling, and unforgettable.

Clearly, The Children's War and Other Poems is NOT for everyone. It's for the brave reader, one to match the fortitude of a poet like Beers', who offers, unflinchingly, a reminder that while the world we live in is an ugly place, there is still great beauty to be found in the depths of sorrow, honesty, and, in never forgetting our humanity.