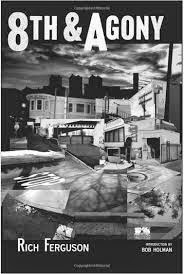 I’m adding my thoughts rather late to the mix, but I feel compelled to do so after reading through Rich Ferguson’s first collection, 8th & Agony (© 2013 Punk Hostage Press). I’m also compelled to disagree with one of his admirers who proclaimed Ferguson “the last of the great poets.” Instead, I choose to view Ferguson as one of the founders of a new generation of 21st Century poets who’ve fused the best of written word with the classical tradition of oral poetry, or in this case, spoken word/slam poetry, and, in doing so, ensures the survival of both.
Ferguson has spent many years performing in showcases. films, and tv shows. His stories have been burned into the minds of thousands of poetry lovers worldwide. If you’ve never had the pleasure of hearing Ferguson perform, then you’re in a woefully uninformed minority. Fortunately, now there’s 8th and Agony, a collection of the best of Ferguson’s poems that leap off the page and into the mind of the reader with the same lyrical ferocity of his aural performances. It takes the twin gifts of a bard and a writer to be able to deftly straddle the words of written and spoken word. 8th & Agony has achieved that level of mastery.
8th & Agony also offers a positive message, poetically and mythically speaking, which is often absent from contemporary poetry. Underscored in all of Ferguson’s poems is an aching tone of wistful hope, even through the lens of grief, as in the poem “Excommunication,” which chronicles the final stages of death and resurrection from a long-term relationship, which could have at one time been romantic and addictive:

A corrosion of loss clotted in his still-unformed wings,
while somewhere in his ghostly remains of memory
lingered a woman’s kiss -
sweet as gardenia.

Ferguson is, as many of his admirers have put it, a “poetic messiah.”I gladly agree with this assessment, as the majority of Ferguson’s poems pay tribute to the bruised beauty of humanity, (“Transition Into Turbulence,” “Certain Things About Certain Women I’ve Known”, “On Becoming an Urban Legend”). Ferguson is a comedic street-corner prophet preaching a new version of the afterlife through the streets of Los Angeles in what I regard to be the best poem in his collection, “The Los Angeles Book of the Dead,”

So if you’ve lied, cheated, looted,
committed a drive-by shooting,
screwed your best friend’s girlfriend/boyfriend,
left your cell phone on during a yoga class or movie,
now is the time your conscience is collecting
those sins and numbering them
on the bones of a South L.A. body count.

Yet if you should find yourself
in a La Brea tar pit hell
filled with dinosaurs, saber tooth tigers,
space aliens, and earthquakes -

Know that it’s merely being created
by the special effects experts at Universal Studios
to ensure your journey
is the most exciting ride possible.

It’s National Poetry Month, and the masses (including myself) will unashamedly push all kinds of reading recommendations into the ether. If you had one book to choose, I’d recommend Ferguson’s 8th & Agony as an experience to immerse oneself into, and as a journey to take alongside one of the best poets to exist in any time or place on this planet.