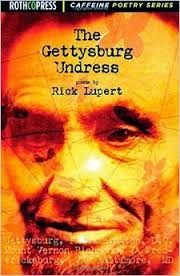 When I was tasked with writing a review of Rick Lupert's latest book of poetry, The Gettysburg Undress, I was excited. Why? I thought it would be easy since Rick is one of my favorite poets, and a wonderful person who has done so much for the poetry community not just of Greater Los Angeles, but also worldwide with his Poetry Super Highway site, and phone in poetry open reading pod casts. Not to mention that he was the generous host of the long standing, but now sadly defunct open reading at the Cobalt Cafe, who made gorgeous broadsides for every featured reader.

Instead it's the opposite experience because how do I do justice to a writer I admire so much? Do I take off my clothes, but here in Phoenix, as I can't afford the plane ticket to Gettysburg? It is in the 90's here already. It could be refreshing. However, my thighs will stick to the chair, so I go hyper literal instead, and opt to write in pants, and a shirt.

It's a good thing I opted for clothes, since The Gettysburg Undress is an anthology of poetry about a family vacation that Rick Lupert took with his wife, Addie, and four year old son to Washington D.C., and other nearby historical sites in the Mid Atlantic states. Nudity just doesn't seem appropriate, even if there is a lot of potty type humor, and a few descriptions of actual bathrooms. In my defense there are a lot of body references, and one wish for nudity in Lupert's delightfully droll observational poetic voice.

Do you feel your age?
asks one man. So I
take my hands and touch
different parts of my body,
pause to consider, then answer.
No, about ten years younger
which gives me an idea for a
new kind of Guess Your Age booth.

With section headings like "we arrive in Washington D.C. and do things which are documented on the following pages," brilliantly concise, laugh out loud pieces such as:

I misread a sign that says Gusty Winds Area
as Guilty Winds Area and think
My God, who did they blow now?

Lupert captures the associative absurdity of life as an adult, while flawlessly capturing the whimsical honesty of the inner smart ass child that never really dies in those of us who can keep from willingly jamming sticks up back door orifices.

Although most of the poems are short, and a few are only one line, there are longer pieces such as the fourteen stanza, At the Air and Space Museum, itself a microcosm of the experience of the reading of the rest of the book, with each verse a complete short poem in itself.

If you can't already tell, I love the book. Rick Lupert has such a distinct voice, and since I've seen and heard him read his work live, I could hear his voice in my head as I read. As a work of poetry, The Gettysburg Undress is highly successful, and as a piece of humorously honest travel writing, it far surpasses the popular prose author, Bill Bryson.

Somehow I turned very serious. I guess that can happen when one wears pants. Perhaps I should have at least gone braless. But now that this review is done, I can go disrobe. Although I do need to go to the library. Perhaps I should wait until later, so I don't get arrested.