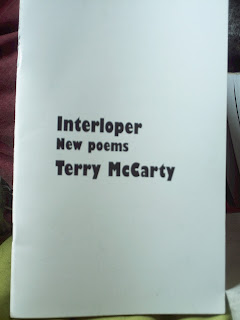 Terry McCarty's new chapbook, Interloper: New Poems, (copyright 2011/2012 McCarty Press), contains a collection of works that successfully make the case for narrative poetry, and poetry as social commentary. McCarty, an integral part of the L.A. poetry scene since the mid-1990's, is the kind of poet whose work will be appreciated by those who will listen to the voice along with the message. McCarty has an illuminating voice; unadorned, honest, and unapologetic. McCarty, to coin an oft-worn phrase, “tells it like it is.”


McCarty's poetry does not contain the usual language tricks; i.e., rhyme, cleverly misspelled words, etc., though, he does employ bits of poetic satire when the occasion calls for it, as in the poem, “Herding Occupy L.A./ Out of Sight/ Out of Mind Blues”:


get along little protesters
get out of the street
get onto the sidewalk
fold your banners
and pack up your tents
because you are making
THE LOS ANGELES TIMES
and television journalists mad
as Heck
now the hounds are baying
for Charlie Beck
to tear off his peaceful-
interaction
make-them-disappear-by-
attrition-mask
and emerge as the Incredible
Two-Headed Hybrid of Darryl
Gates and Ed Davis
crying havoc
and unleashing the tasers and
batons
get along little protesters
business must do whatever it
wants
we're not going to listen to you
Occupy people
since our city is not a city of “the
people”
but a city of, by, and for
the Very Important People
of AEG


Interloper, as a whole, is cohesive. McCarty's intelligent, caustic style dovetails well with short, direct lines of verse that lead the reader through a unique perspective of Americana on both a personal, and political level. There is also an engaging vulnerability in McCarty's poetry: not the “poor me,” confessional doggerel deliberately designed to elicit sympathy, but, a vulnerability that is more universal, and immediately appreciated; the struggle to come to terms with a part of ourselves, the part that does not let us instantly divine who we are/what our ultimate purpose may be, as in the poem, “Dropping Anchor”:


Threw my weapons overboard.
Wrenched my hand from my
throat.
Opened the galley refrigerator.
Enough rations to survive.
There will be books to read,
clouds to watch,
chances to say hello
to temporary people
who come for day-trips
in other boats
and stop to eat, drink,
wade in the shallows.
When they are gone,
maybe I'll learn to listen
until I hear the music
inside the silence.


My recommendation: make room on your poetry shelf for Interloper:New Poems. You'll be glad you did.