Every Day is An Act of Resistance: Selected Poems by Carol Tarlen 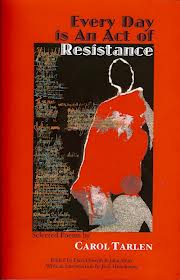 Every Day is an Act of Resistance: Selected Poems by Carol Tarlen, edited by David Joseph and Julia Stein (copyright 2012 Mongrel Empire Press), is a fitting tribute, and homage to Tarlen; poet, mother, activist, and compassionate human being.

In Every Day, each poem is infused with the daily life of Tarlen, and vice versa. Tarlen was a poet who lived with her shields down, and, in the tradition of Blake and Whitman, breathed poetry as easily as air; her poems are full of vitality, and, decidedly non-magical, as one would expect from a working-class poet. However, there is a delicacy to her work, a sensitive strength, which takes Tarlen's poems out of the category of “working-class,” which may be, along with her background, puts her in class by herself. Tarlen's poems evoke the beauty of a wrought-iron fence: strong, detailed, and, starkly exquisite, as in the poem, “To a Young Dancer”:

You cant bend your knees,
So you cry at night, while
I pound language from a
machine. “I'm sorry”
is an empty sound, not worth
legs gone mute. In this

Chinese year of the horse,
we don't speak of justice,
or that you been named
snake. The doctor says
Quit the dance, but I'm your
Mother, and I say, CRAWL,

Light circling your new skin,
as you slide to center stage.

Tarlen, a Bay Area poet, was not able to achieve the level of success that most of her peers. Co-editor Julia Stein, who wrote the moving forward for Every Day, described Tarlen as a “North Beach Emily Dickenson.” Tarlen was widely published in literary magazines and anthologies, but was not able to secure a publisher to put out a full-length collection of poetry during her lifetime. That is where the difference ends. Poetry publishers, are no different than other publishers who have to think in terms of dollars and cents, but, more than likely, were intimidated by the frankness of subject matter of Tarlen's work. Seriously, who wants to read about a woman's struggle to come to terms with violence and violation, as in the powerful poem “Arguments With a Would-be Rapist?” Or, who wants to be reminded of the struggle to make ends meet as in the poem, “Welfare Rights,” or, be gently admonished by Tarlen into remembering that every person, no matter what their circumstances, is infused with the spark of the divine, as in the poem “As an Angel Glimpsed by Blake”:

Standing near the doorway of a steel-
encased office building, the man
in the worn, black suit
wipes the soil from his frayed, white
starched cuffs and waits
for his son to enter, eyes lowered,
as the man too, lowers his eyes.
This is the best he has,
the poverty he wears, his empty hands
a gift of shame for a son
who looks away.

I see the old man
in a darkened theater,
an image superimposed on scenes
of a filmed revolution,
slipping between shadows that fall
on slogan-plastered walls.
He is my vision, my DNA chain;
I circle my wrists with his hunger
that shimmers beneath my skin
translucent like a bleached jellyfish
on oil-slicked sand.

The answer to the above questions is that I would, as well as others who can look beyond the appellate “working-class,” will appreciate the depth of feeling, and power of Tarlen's work.