David Herrle's Sharon Tate and the Daughters of Joy 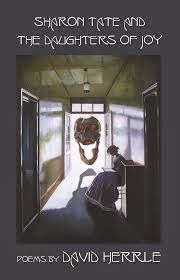 David Herrle's Sharon Tate and the Daughters of Joy (© 2014 Time Being Books), is a hefty poetic treatise that explores – in Herrle's scarily well-informed opinion - the varied and contradictory reasons this world reveres and destroys all that's bright and beautiful, as well as the impact of macrocosmic events (history) on a microcosmic happenstance (the human soul).

To prove this premise, Herrle devotes the first third of the book by paying tribute to well-recognized icons of beauty (Katy Perry, Rita Hayworth, Eva Braun, et al). Here, Herrle champions the girl on the pedestal whose unwilling/unwitting elevation to heights of glory both exalts and condemns her. Herrle compares and contrasts the ever-increasing modern day need for destroying that which you love to The Terror in 18th century France, Hitler's Holocaust, and the invention of the atomic bomb. This sets the reader up for a one-two punch. The meat (no pun intended) of Sharon Tate involves Herrle's troubling look into the depths of three historical lovlies who, through no fault of their own, met with a grisly and tragic end: Sharon Tate (at the hands of the Manson Family); Marie Antoinette (under the blade of the guillotine), and Mary Jane Kelly (the last, youngest, and most attractive of the Ripper victims). Herrle doesn't spare the reader any time to feel remorse. To balance the equation, he also invokes the maddened minds of Jack the Ripper, Charles Manson and his followers (Susan Atkins, Patricia Krenwinkle, etc), and various personages from the (pre/post) French Revolution (Jean-Paul Marat, Marquis de Sade, Napoleon Bonaparte). Beauty v Beastliness, Peace v War, Life v Death, Creation v Destruction; all of these themes are dissected under the blade of Herrle's excellently written poetic prose. In the end, why do we even bother?

I believe, and I may be going on a limb here, we (in this case, Herrle) bother because to do so leaves us with nothing left to live for. Even in an existential world, there is a need for beauty, light, and a purpose beyond oneself. Everyone needs to be a hero (Joseph Campbell was correct). Theology, philosophy, art, music, poetry, none of these things matter if one cannot, even for one brief moment, transcend the visceral “anus mundi” to advance beyond the immediacy of their shitty existence. Herrle proclaims, “I'm... the Scarlet Pimpernel.”

Herrle also dares himself and the reader to take their deeply ingrained ideas of beauty for a walk through the darkest depths of hell. Every artist must do this; question WHAT they believe in, put that belief through the ringer, abuse/rape/destroy it to see if that belief can/will survive. How would one's viewpoint change, say, if you it came to you, as it did to me, that I was born one day before the Tate-LaBiana Murders? How uncomfortable would it make you feel to know, as you were drawing your first breaths, that a couple hundred miles away there was a psychotic band of fringe hippies planning the murder and evisceration of Sharon Tate's baby, an innocent who should have been born into this world without harm the way I was? How ugly and intrusive the world becomes to me when these thoughts present themselves. How enraged I become when I read Herrle's imagined account of Tate's last moments, and those of her baby's life in the poem “The Baby Lived Twenty Minutes After Sharon's Last Breath”: “You begged those soul-midgets/to take you to their lair and kill/you after you birthed your son./The gleeful stabs that replied/seemed to make one girl cum.” If this doesn't lay you low, as it did me, if it doesn't make you question the cruelty of the world and challenge your premise of sweetness and light, I don't know what will.

All is not lost. In the end, (sorry, no spoilers), Herrle is able to give the reader a glimmer of hope, like a wet towel on a bad burn. Sharon Tate and the Daughters of Joy is Herrle's stunning account of initiation into the deepest layers of self-doubt and the hard-won attainment of inner wisdom. Treat Sharon Tate and the Daughters of Joy as you would a copy of Liber AL vel Legis, The Torah, The Koran, or The Art of War. It's not a book for the meek, but it is a book that will make the reader stronger for the reading.