Back in school, my teachers swore that Chaucer and Shakespeare and Milton (each of whom had entire courses devoted to studying his works) were probably the greatest poets who ever lived. My Chaucer teacher even went a step further, dropping the “probably,” and calling Chaucer the Father of English poetry and the greatest poet of all time.
And, after taking this class, and another two courses all about The Canterbury Tales, I agreed. I enthusiastically agreed! Chaucer was amazing, and I was hooked. Why hadn’t I heard about him before? Why didn’t anyone write like this anymore? I wanted to write like this. I wanted to write something epic, too – not the shapeless, rhyme-less, craft-less, whining, coded, confusing and inconsequential stuff I believed everyone else to be writing at that time. 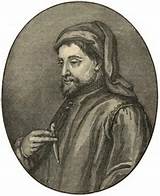 There was just one problem.
I was one of them. In fact, I still considered myself mainly a whiny and inconsequential fiction writer, not really a poet at all, let alone a poet of any merit. I was a dabbler at best whose main poetic ambition was simply “to get girls,” so this connection was a true life-changer for me. Nothing, before or since, has had the same effect on me that reading The Canterbury Tales had – not after hundreds or maybe even a thousand or more books later.
And it wasn’t just the sheer size and scope of the work. I actually related to Chaucer for some reason – unlike Shakespeare or Milton or seemingly anyone else, not to mention any of the modern poets either, who, in my mind wrote nothing like these greats. Truly unique, The Canterbury Tales was highly structured and formal and yet so easy and enjoyable to read and to understand. It was musical and funny and clever. The decasyllabic couplets and mostly iambic rhythm seemed perfect for this kind of storytelling.
A couple more years of studying Chaucer and almost a decade later, I’d written what I considered my first “real” poem, The Brubury Tales, an homage to Chaucer’s Canterbury Tales – a 65,000 word “epic” rhyming poem. Finally, I felt like I was a poet/storyteller, too. And while I’m no Chaucer and never will be, and no teachers care about my work enough to teach it to the future poets of the world, I still feel that strong connection to Chaucer and his work through my work. In fact, whenever I feel doubt about my ability (which is all of the time) or whenever my work gets rejected from journals or gets a bad review (which is all of the time), I can and do (and will continue to) return to Chaucer’s world for a little while to forget about the problems in mine. 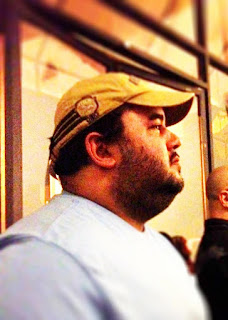 Bio: Frank Mundo is the author of The Brubury Tales (foreword by Carolyn See), a modern version of Chaucer’s Canterbury Tales set in Los Angeles just after the 1992 riots.