Welcome to the Dollhouse: the Poetry and OCD of Cat Angelique McIntire 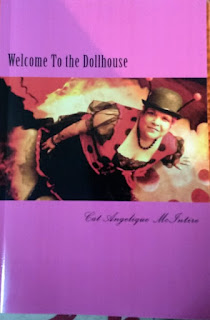 There are poetry chapbooks hastily thrown together, due to desperation/laziness, and chapbooks edited within a hair’s breadth of perfection. Then, there are chapbooks that capture the essence of the poet in the “decisive moment” (ala Henri Cartier Bresson), which is exactly the category Welcome to the Dollhouse: the Poems and OCD of Cat Angelique McIntire, © 2016 Baxter Daniels Press/International Word Bank, falls.
McIntire, poet, and co-host of Poetry Stew, a vibrant reading that showcased some of L.A.’s best emerging and established poets, sadly, passed away in early 2016. As stated by both David McIntire, who curated his wife’s debut chapbook, and Brendan Constantine, who wrote the moving introduction, McIntire tended not to think of herself as a poet (truth: many of us never do, which a universal trait of a poet, imo), but Welcome disproves that assertion in spades.
Welcome introduces the reader to McIntire's creative process, which, in part, feels like reading directly from the pages of her journal, minus the tears and edit marks. McIntire’s poems appear raw,full-blown, and almost promethean, on each page. Welcome is an intensely private experience, and there’s a a variety of poems to savor: love poems (“they were the oddest 5 seconds of my life”, “keys”); poems written in praise of her favorite inspirations (“wondering about wanda”, “letter to a shipwreck”);  poems written in the final days of her battle with cancer (“cancer ward #1”, “cancer ward #2”), and real life hardship moments filled with humor and self-realization, as in the poem “pawnshop blues”:


I was in my go-to pawnshop yesterday
tryin’ to scrape together some survival funds -
and the was this ol’ hefty black man sittin’
in the corner,
pickin’ and strummin’ blues riffs on a beater
guitar
his face was a heavily lined roadmap, and
his porkpie hat looked like it’d traveled
every mile with him.
I said “can you play me the I just pawned my
wedding rings to buy milk and butt wipe
blues?”
his large laughter filled the small room.
“baby girl,” he said
“I’m an old blues man who’s gotta tuck tail
in hear to play his own damn guitar - it
don’t get no bluer than that.”
and the battle of the blues began -
‘we just went broke on our dog’s back
surgery. we can’t pay rent and just found
out she won’t walk again anyway. THAT’S
bluer.”
I grinned a challenge.
“I lost my job of 42 years to a skeevy little
brown-noser greener than a new frog’s ass n
they took my pension to boot.”
he played an underlying progression.
“BLUER.”
“I got two different organs fighting over
which one’s going to kill me first.”
I assume a confident hand on hip stance.
“BLUER.”
he leans back, hands sure in their stillness on
his axe and delivers the kill shot:
“kids ‘r dead. wife’s dead” (blues
progression). “dog died too.”
I shook my head n grinned, a beaten baby
girl.
Never try to out-blue a blues man.

My personal takeaway, after reading Welcome, is mixed. I’ve always respected the poet who doesn’t sacrifice honesty in the name of mainstream appeal. McIntire instinctively followed this rule, which, in the longer view of poetic history, places her in the poetic pantheon of Bukowski, who achieved poetic acclaim (mostly) after his demise. However, in the interest of honesty, I wish this collection had included more of her work. The length and breadth of McIntire the poet is partially conveyed in Welcome. What I hope will happen - eventually - is that a new edition will be expanded/edited into a more comprehensive and complete collection. For a poet of McIntire’s caliber, that is my wish. In the meantime, I thoroughly recommend purchasing a copy of Welcome to the Dollhouse, and enjoy it like an awesome first date - with the promise of more amazing times to come.