Jack Henry, author of "Blisters on My Soul" 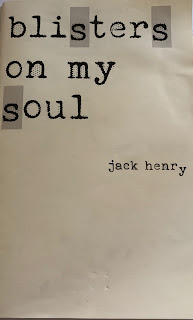 AP: What inspired you to write/publish Blisters on My Soul?

JK: First thank you for asking for an interview.  Always my pleasure.

Blisters on my Soul was produced as a test for other chaps on HLS / d/e/a/d/b/e/a/t Press. I was trying to see if I could produce a chap and if I could produce something that was aesthetically pleasing.  I used only previously published as I am not that interested in self-publication.

AP: The majority of poems in Blister are written in the present, like a series of short films. Would you describe yourself as a poet who “lives in the moment”? Why/Why not?

JH: I generally live in the moment, not much of a glory days kinda of guy.  What’s past is past and nothing more. Although I believe that we are informed by the past, both by our own actions and those around us.  Often these actions can be small or sublime and create the most impact.

I find that I am an observationalist, whether out of my fear of people or shyness, or general awkwardness in a public setting. There is a pride in noting the little things and those little things often find their way into my writing.

With Blisters the selection of poems was random. I didn’t look closely for a them or string of thought., but upon review they are very much in the moment.  That is the moment written.  I don’t sit around and try to draw something out that I can put on paper.  I just start writing and if anything sticks, so be it.

AP: In Blisters, you’ve written a lot about the political divide in the country from the previous administration. Do you see a need for poetry as historical commentary, and if so, why?

JK: Poetry can contextualize history, provide emotion, feeling, it fattens the story, makes it person.  Anyone can read or write about “history.” Dates, names, activities, etc. But a clearer since of the time is provided by poetry.  It is often a first-person document, written in the moment.  Consider poems of the American Civil War or the Bolshevik Revolution.  One gets a clearer understand of the personal “enormity” of the times, on a smaller scale, a smaller stage.  The more important “meaning” of a given time is often captured within the smallest context of that time.  Not being able to eat, struggles to find food, the horrors of war, disease, fear, tragedy can all expand the meaning of a historical time and that is often brought forth through poetry.

As far as a “need?” Yeah, absolutely.  Especially in the moment. Another aspect of poetry and this is reliant on the poet, is the ability for words, poetic words, imagery, metaphor, etc., to explain the context of a historical event.  Take the recent failed coup of the Amerikan government.  A lot of the poetry I’ve read regarding this event are pure rage, but sorrow, despair, confusion, etc, and that is easily expressed through poetry. 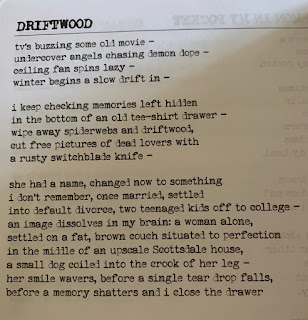 AP: Do you believe poetry can heal the division in our country? Why/why not?

JH: No.  I know a lot of poets and writers in general believe words can heal, but they can’t.  Words inform, words define, words provide meaning, but they do not heal as a whole.  Words can remind or motivate or provide clarity, but healing only comes from action.

AP: Who’s the woman in your poem “Driftwood”? Who’s is the man in Garden? Why did these two people make such a deep impression on you?

JH: The speakers in both poems are amalgamations of different people and input. I generally do not write in specifics in association with a given person.  That is, I do not write a poem with any given person in mind.  Even when I use the “I” or first person the character, should there be one, is not me.  The voice is not me.  How could it

be?  Once I write a poem, I no longer own it, it no longer belongs to me in any sense.  Every reader brings their own influence and context to a poem and as they read it they own that poem.  It is unique onto them due to the interpretation they bring to it. With that belief, one I have always held, I could never write a poem about a specific person, even if I named them in that poem.

AP: Who are your current poetic influences?

JH: This is a tricky question and I will come off as a writing snob, but I don’t have any influences from writers. At all. I did.  When HLS first came out, in my program in college, but I have learned that if I get too into a writer, an influence, I sound like a sloppy copy.  No one wants that.

As far as poetic influences I find those everywhere. Nature, life, environments, people, TV, movies, and so on.  For example, after watching Lovecraft Country, I wrote a number of poems.  After a long weekend with my dad, before he passed, I wrote a bunch of poems.  Neither could be directly based on a “Thing,” either TV show or parent, but rather the environment or context I consumed those moments.

I don’t think a writer can be influenced by a single “thing,” as much as the influence comes during the event or act of consumption.  For example, the way you watch a Pandemic Movie can vary greatly if one watches during an actual Pandemic, or outside of a Pandemic.  Your perspective changes, your consumption changes, and the values/influence you gain are different.  I think this is true of all things within. Contextuality is key.  Another example is how I answer these questions.  This is the third time I have gone through it and each response has been different, vastly.

AP: I’ve seen a lot of posts, since the pandemic started, on social media about writer’s block, due to isolation, anxiety, and stay at home orders. How have you managed to subvert this?

JH: I have always forced myself to write.  Sometimes it’s gibberish, sometimes it is mad genius, but mostly it is bits and pieces that are used later to create a whole.  Every day I write from 7-8 am.  Some days I will do more, but never less.

And while I have experienced writer’s block (over 8 years, between 2010 and 2018) I now know that I can defeat it and work through by having a routine.

AP: upcoming literary projects are you working on?

JH: Driving w/Crazy, is coming out in late Spring 2021 from PUNK HOSTAGE PRESS.  It is a themed collection of purpose written and previously written poems and essays.  Broadly covers my childhood through my father’s death this year, and examines my perception of his mental illness and how I existed in that world.

Also, HLS and 1870 Press are still around, but the whole publisher/editor thing is becoming a drag, like work.  I started them as an outlet for fringe writers but there are so many outlets for fringe writers, I am not sure I see the value in having mine.

Last, I am hoping to get rob&jack america back as a podcast but time will only tell with that. 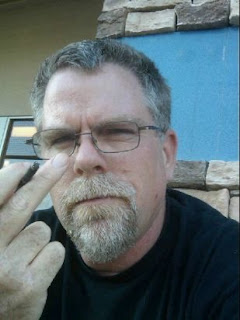 Bio: Jack Henry is a poet living south and east from Los Angeles. After a self imposed hibernation Jack reemerged and started writing again. Recent publications include Red Fez, Winamop, and dope fiend daily. In August 2019, Heroin Love Songs, a poetry journal Jack publishes, will see the light of day once more.