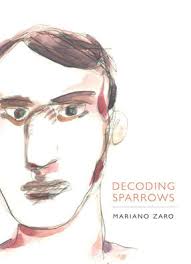 There’s an infinite number of reasons to write, as well as read, quality poetry. The most important, in my opinion, and based on my experience, are the following: love of language, development of one’s spirituality/empathy, and to document the deeper moments of human existence. To be able to harness all three in a poem is a challenge, though every poet I’ve ever read strives to do their best. Very few poets consistently succeed, and one of those is Mariano Zaro. His work, over the years, has been a steady journey toward this poetic trifecta, and his newest collection, Decoding Sparrows (© 2019 What Books Press), is proof of his mastery.
Decoding Sparrows, divided into three parts, contains personal accounts of people who populate Zaro’s universe; family members from his youth in Spain (“Decoding Sparrows”, “Old Petra”), friends and lovers (“Convenience Store”, “The Crown of Youth” ), as well as strangers in passing who’ve left their mark on his poetic consciousness (“Nun Eating a Small Apple”, “Street Vendor”).
Zaro’s minimalist style and dialogue launch the reader right into the heart of each poem, where they become one with the person who’s interacting with Zaro. It’s a powerful and unique synthesis of reader, poet, and subject, most notably in the poem, “They Say Fire is the Tongue of God”, where Zaro takes a Benedictine Anglican monk, Brother George, to the remains of his monastery, which burned down to the ground during the Tea Fire (2008), in Santa Barbara, California:


Past fire extinguished inside cold volcanic rocks.
Future fire in lightning, war, and funeral pyres.
Present fire in this combustion that we are.


I drive Brother George to the monastery.
To the place the monastery used to be.
This is his first time back here
after the fire destroyed it all.


I bring my dog Cooper with us, because he loves
Brother George, because he may help
sort out the path of grief.


It’s hard to believe, Brother George says
when we arrive, standing at the edge of the road.
The tower was there, he says, pointing
at the air on a clear Saturday morning.


Workers have removed the rubble.
Brother George walks into the dark, flat ground.
The library was there, he says. The refractory,
the pantry, our rooms, the main chapel.


The bell is still standing, lifted on a tall, uneven tripod.
A bell big as a horse’s head, all bronze but humble.
Almost embarrassed by its survival.


Brother George rings the bell, three times,
and the sound, violent and soft, rolls down
the mountains that open like a throat.


Cooper gets agitated, starts barking at the sky,
eyes furious, leash tense. I kneel down and
cover his ears. It’s okay, it’s okay, I say.


Brother George leans his forehead against
the bell, suffocates the last breath of sound,
and all is quiet again, inescapable.


Poetry is a gateway to empathy, an ever diminishing commodity in this present age. Zaro’s Decoding Sparrows will help keep readers in touch with their humanity, as well as their humility, the two best qualities that make us, as a species, worthy of survival.