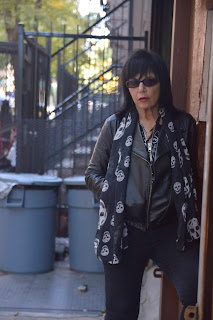 If I Didn’t Dream It

I stopped remembering my dreams.

They seem to have gone the way of live music,

Sex and conversation, laughing in the street;

Did any part of my life really happen?

Or have I always sat at this desk,

hidden away from people

imagining dancing in front of the band,

music so loud it took half my hearing

and, in that moment not thinking,

not caring about consequences

or tomorrow or even much of yesterday?

Was it all a dream?

Did I sit, surrounded

by not quite white walls

and rows of books,

as I created the life I thought about,

the one I always wanted,

a tough broad with a soft spot

that only a few ever touched,

If it was real, wouldn’t I dream it?

Sometimes I wake in the morning,

floating towards the ceiling,

unclear why they’re the ones

who visit, never anybody

with a hint or mystery

or a scent of the forbidden,

just some legs and heads,

or standing in the elevator.

another coffee in the same

Does it mean I was there,

at a museum retrospective

Or did I sit in my chair

in front of the oak roll top desk,

far away from art and air and breath?

What if everything is a dream

and my sleeping hours are empty

of thought and image?

What if nothing in my life ever happened?

(in memory of Savage)

he cancelled the plans

that he had initiated

I was not surprised,

I’d have to buy my own food

if our souls are all the same

once you peel away egos

but the air we breathe,

the sky we see,

the swords we bury

so deep below the surface

it was not his cancellation

that crushed my heart

despite my clumsy efforts

to piece the puzzles

will never be unsaid

We writers are blessed

but my dark heart

Chinese food on the way

Puma Perl is a poet, writer, performer, and producer. She’s the author of two chapbooks, Ruby True and Belinda and Her Friends, and three full-length poetry collections, knuckle tattoos, Retrograde (great weather for MEDIA), and Birthdays Before and After (Beyond Baroque Books.) She was the creator, curator, and host of Puma’s Pandemonium, which brings spoken word together with rock and roll. As Puma Perl and Friends, she’s performed regularly with a group of excellent musicians. She’s received three awards from the New York Press Association in recognition of her journalism and was the recipient of the 2016 Acker Award in the category of writing.

Posted by Marie C Lecrivain at 8:06 AM