The Year I Left My Mother

The year I left my mother, I left the sea. I fled my mother's unpredictable moods,
reminiscent of the ocean's volatility. Despite times of serene beauty and calm, it
arises. It does. It is its nature. I was thirteen.

Venice was once a poor beach town populated by immigrants from Europe—
survivors of the Second World War. My mother was one of them. A stained glass
English Rose held intact within the London Blitz. Only later while England and
Europe were digging out from the wreckage,  did her fragile facade loosen
and shatter.

I experienced the broken glass along with its glint and sparkle. The part that
buoyed me on her magic when the other part was not cutting and imbedding
me with pain.

Many years later I met a woman. A brilliant poet. When she shared her poems
with me,  it  was just another aspect of her that delighted. Nothing pedantic about
the way she executed the lines. It wasn't until later I was to witness the mechanism
strongly crafted under her surface, something honed, even polished, but initially
out of view. The precise workings of a timepiece beneath an ordinary face.

Time piece or time bomb? In the end I didn't stick around to find out.

Angie was older than me, a dry wit, highly intelligent. I knew she was homeless but
she didn't seem like she was. She was well-groomed and appeared on top of it all.
The car she lived in was clean and polished. At night she slept under an expensive
down comforter. I met her the year I was in the canyon. The verdant seductive
mountain on the edge of the Southern California coast. It was like no place I lived
before. Removed from the frenetic vibe of Los Angeles, it was a well-kept secret.
The house I shared with two roommates sat far back in the woods, a winding narrow
road branched off from another narrow road, the main boulevard far enough away,
it was easy to forget a lot about the life that boulevard could lead you back to. I did,
however, venture out onto it every day because I worked full time in a bookstore
down in the city where I first met Angie. Every two weeks when I got paid I made
pasta, salad, bought a warm baguette and a bottle of wine. Angie shared the meal
with me and we'd listen to Puccini's soaring arias, while beyond the large windows
of the house towering evergreens seemed to listen with us. I could have stayed
in the canyon for years.

“What did you think?” she said on the phone. We talked daily. She was referring
to her poems.
“They're really, really good.”
“Yeah?” she hesitated. “The one about the horses,” she ventured.

“Yes, I like that one a lot,” I said. “There is one line though,” I read it to her.
She crowed, “Oh I KNEW you'd say something about that!” It was subtle how she
placed The image, but it didn't work. Chances are no one else would have caught it—
they'd have been swept up in the beauty of the metaphors, colors, galloping horses.
We laughed.

That's what it was like. Almost telepathic connection at times. We were kindred
as artists. And she seemed to get me. The problem was I couldn't look at what was
right in front of my nose and what my instincts were already heightened for. And she
was a treasure—one of those rare individuals you really clicked with, keeps you on
your toes — mentally stimulating. So, I pushed away the facts. I did know on some
level I was trying to get my mother back.

Now, my mother, she's always with me. I don't miss her. In some deep
underground river within me she flows and that water is sometimes ice cold
with longing and neglect. I can go there, but I don't often. She loved me and I
felt that love, had that love before I was tired and disappointed, before I suffered
at the hands of life, at the hands of her.

Like my mom, Angie, my poet friend, was a bit nuts. She swung over a precipice
and lived a story I was only partially privy to. “You wouldn't believe me if I told you,”
she said. I waited for her to reveal her secret. But she never did. There was a
mysterious bank account and for food and art supplies. It felt dangerous to know her.
And she didn't divulge a lot. The warning kicked inside me, but the chemistry was
too enticing. Her intellect. Her understanding. The common bond of poetry.

I told her about my mom and once showed her a photo of the man I was in love
with, who I had an on again, off again romance. At the moment it was off. I missed
him, but Angie made it a fun summer, idyllic even. I wanted to help her to stop living
in her car. Sometimes let her sleep in my often absent roommate's bedroom. I
sought to rescue her. I know now such an impetus is really a need to rescue myself.

The season turned cold. The canyon became dank, its drop in temperature held
tight within the mountain, within its impassive stone. Angie visited one evening, surly
and accusing. The back of my neck prickled. I was afraid. It was familiar. Angie
babbled incoherently backing away into a corner of the room only to lash out again.
Bewildered, I watched her leave, her shoulders hunched into the night and the dark.

The next day when I came home from work, my roommate said Angie had left
something for me. It was a quite heavy plastic file tub. A few seconds later the phone
rang. It was her. She said she needed me to hold onto her artwork. Also, that she
would bring up a couple more things for safe keeping. “I can't do that,” I said and
imagined her driving up uninvited along the windy highway, up and up and into
the dusty back lanes, darkened by brush and California Oaks to deliver this
precious cargo into my protection. But I couldn't protect it. I knew the neat
densely packed file tub was just the beginning. Angie was handing to me,
her life.

I delivered the box to a common acquaintance, and informed them that
Angie would be picking it up. I felt calm, sure. And cold. After that she began
to stalk me.

She'd leave lengthy messages on my machine, filling the tape. So I took the
phone off the hook. Once her free clinic therapist got through and pleaded with
me to speak to Angie again. Angie, she implored, was “such a sweet little person.”
But having lived in the wilds, I had developed some instinct. “I cannot speak with
her anymore,” I told the therapist, who apparently had not encountered much
yet in life. And I played dead, a kind of camouflage. I ignored her later, on
another day when she got out of her car – she had followed me, apparently,
along PCH and she now trailed me into the corner market at the bottom
of the mountain. “I have a small stereo for you. It will fit into your car easily,
you can take it right home with you.”

“No thank you,” I said and moved out of the store, got into my Nissen Sentra
and drove back onto the road, my eyes trained straight on the lane before me. I did
not look in the rear view mirror. Not even a glance.

A week later she showed up at my house one more time. I went to meet her on
the porch. “Angie, I'm moving.” It was true. The owner wanted us to vacate so his
relatives could move in. I had a month to find another place.

“I don't know.” I didn't. I looked down at the wood slats of the deck we stood on
and then past her at the ever present sheltering trees. “Angie, I can't be friends with
you anymore. You need to get really good professional care. I can't help you.” And I
turned to go inside. But because I ached a little, because the thing that made me open
to the friendship to begin with still lived innocently inside me – it will always
be innocent – I turned back and took her hand, “I’m sorry,” I said. She made a
little sound in her throat. Eyes watching my face, her shoulders turned first and t
hen she looked down, stepped off the porch — at this point I removed back into
the house. I imagined she took the steep stairs one at a time to the road below,
the impassive trees that lined the road growing taller around her. I never spoke
to her again.

My mother gave me gifts that are mine forever, in the marrow, in the soul,
in the way my synapses fire. Her love, a steel sword, forged in fire and water
and fire and water. It has taken decades to recognize the bounty she left me.
No, I cannot show you an inheritance of cash, or a family house, or evidence
of family lineage in photos, or writings, or books or china, or stuff. Anything
material that I could have inherited was left in a hurry, through fire, through
haste of desperation, in the end my mother's need to be free. Which was her
survival. So, for years I held on to things, reluctant to toss something because
of what it cost me to acquire it.

We find what we love in others, we find parts of ourselves, but sometimes
that love comes with a dangerous darkness – experiences we should have
learned through and grown away from. So, in the end I released my mother,
as I released Angie for the good of us both.

My mother, she still visits. She is in the sudden strain of Chopin playing
unaccountable on the rock radio station I am tuned to in my car. In the once
only snowdrops in a neighboring garden. The rain. And in the way I needed
to live amid the green, the ample towering green of the canyon.

Eventually though, I returned to the sea where I had loved her best.

Once before she died, she read a piece of my writing and her face
changed. We were sitting in the garden where she lived, in the fresh air
as she preferred. She looked up from the page, “God,” she said, turned
to me, saw me. Really saw me. She was the first. She was always the first. 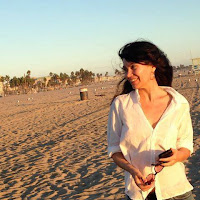