Cinderella watched her two sisters leave for the ball, as she stood
there in her rags in the sooty kitchen. She wished her fairy godmother
would come to her and the fairy godmother indeed arrived, although
she was annoyed that Cinderella had interrupted her while she was
enjoying her live-action outdoor mummer troupe soap opera, As the
Known World Turns.

Cinderella demanded: “Can you turn these rags into a ballgown and
this pumpkin into a coach and the mice into coachmen? And can I
go to the ball and meet a handsome prince and have him come after
me to see if my lost slipper fits my foot and can we live happily
ever after?”

And the fairy godmother said “Not gonna happen.”

And away she flew.

Cinderella grumbled a little but she went to her sisters’ rooms and
raided them for a nice gown, slippers, a fur wrap, jewelry, a glittery
bow for her hair.

She went out into the street and thumbed a ride with a grocer’s cart
and got to the palace in time for the ball.

She made her entrance as elegantly as she could but the Prince was
surrounded by ladies of the court and took no notice of her. Other
men, however, asked her to dance and one of these men seemed
especially hot. She went back to his place and they made wild
passionate probably illegal and blasphemous love all night.

The next morning, he told her he was really busy and had
an appointment. In other words, he threw her out on her ass.
But Cinderella picked herself up and went about the town
looking for work.

She found work as a scullery maid, not her first choice but they
gave her a uniform and a small cubicle to sleep in and she put
aside her coins every week in a small jar until she had the money
to buy some nice fabric and make herself some presentable clothes.

She then gave notice and went looking for a better job. As it
happened, she found work with the local scribe. She shuffled
his papers and replaced his ink jars and cleaned his pens.

When her new clothes seemed to be tighter around her belly,
she told her boss but he was understanding and he agreed to
marry her. He was an old fellow but he was nice to her and
to the baby.

When she came up with an idea for creating a faster way to
produce documents, not by writing them by hand but by using
sheets of metal to make many copies of documents, something
called printing, he liked the idea and implemented the use of
the first printing press. This made Cinderella and her husband
a lot of money.

One day it occurred to Cinderella that the gossip she heard in
the market place could be printed on sheets of paper and
distributed to the people of the town. In this way, Cinderella
invented the newspaper. This made her and her husband even
more money and she was able to afford servants of her own.

When her husband died, Cinderella continued to run the
printing company and the newspaper and she expanded her
business to other towns until she had a syndicate of newspapers
all over the kingdom.

She wore the finest velvets and silks and traveled in a coach with six
white horses. Her daughter also wore the nicest clothed and had
tutors who taught her all the languages of the region.
Cinderella was not lonely because she had so much money and was
so attractive due to her nice clothes that she had her pick of handsome
young gentlemen.

One of the news stories that she published was that the Prince had
married one of her sisters but it had turned out to be a difficult
marriage, as he was carrying on with Cinderella’s other sister
and the whole thing became a scandal and a messy divorce.

And so Cinderella wrote an editorial op-ed piece in which she thanked
her fairy godmother for saying “Not gonna happen” when Cinderella
wished for a ballgown and coach and the love of the Prince. Because
what did not happen was nowhere on the level of what Cinderella
made happen all by herself. 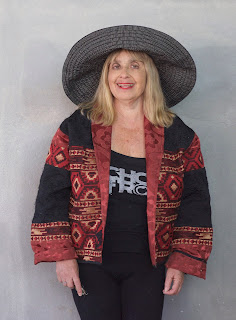 
Lynne Bronstein has been a journalist for much of her adult life and has been a poet and fiction writer since childhood. She has also become a crime writer, with a short story in the Sisters In Crime anthology LAst Resort, and a playwright whose Shakespeare adaptation “As You Like Totally Like It” was produced by the Expressions reading series. Last year she sold a story to National Public Radio. And she modestly adds that she has two Pushcart and three Best of the Net nominations.
Posted by Marie C Lecrivain at 7:46 AM