“It was just the two of us, surrounded by staggering beauty.”--Claudia Handler
Here is the deal, Alma.  We won’t speak the names out loud. We will whisper them to each other when the time comes. Your job is to keep me from becoming sidetracked by my humor. My job is to speak the truth to you, to assure you that what you suffered from was neurasthenia, a nonsense disease ascribed to bright girls from whom the wrong things were expected and to whom the right things were denied.  Nobody suffered as much at the hands of small-town doctors as the bright girls did, Alma.  You were far more observant than you were ever given credit for, and like every small-town Cassandra, you were ball-and-chained to a nonsense disease.  No wonder the girl you were had to burn away entirely that harsh summer in order for you to survive.  Me, I burned for nearly thirty summers, twenty-five before I even realized that I was on fire.  I know that seems like a lot of time to you, but your lifespan is a two-act play.  I have been around for fifty-six years.  It took a long time for the good, sweet girl in me to evaporate.

Give me your hand, Alma.  You loved him more than any cool drink of water, any slice of frosted cake, any burst of your favorite color, any perfect day, any song hummed to you by your mother before she lost her marbles, any handkerchief redolent of your favorite sachet, any moment that your father told you he was proud of you, any archangel, any notion of perfection and the hereafter precisely because that boy was who he was.  He was a sharp boy, a hungry boy, and you understood him.  He was an imperfect thing, an arrow whose trajectory was well off the mark, but you loved him for who he was, and in the most secret cache of your heart, that was plenty enough for you, for the girl you were before summer burned away the anima of Alma.  On the surface, you seemed to have become carnal, selfish, perhaps even cynical. People are so quick to ascribe bitterness to maturity.  They mistake the slow pace of recovery for lassitude and indolence. But the truth of the matter is that you saved your most secret self, and you began to feed her.  And that was an absolute good.  We cannot feed love to others if we are not first fed ourselves.

So tell me, Alma.  What is the name of your new love?  And I will tell you mine.

I crossed a contested borderline in order to be with mine, Alma.  There are those who would judge me for the choice I made, including myself before my many summers of immolation.  But the days of Thermidor have tempered both of us, and I suddenly found the muscle to step over the line when love was offered to me for the first time in twenty-one years. I know, I know. That’s a lot of two-act plays.  And I know, that’s my humor cropping up again.  Forgive me.  I had to be fifty-six years old before a man looked at me and told me I was beautiful.  I had to be fifty-six years old before a man said, “I have fallen in love with you, Amélie.” And he said it first.  And I was so tired of being The Brokenhearted Girl that you, more than anyone, can understand why I had to step over to the side where he stood.  As with you, summer had to end for me some time.  It is a day-to-day thing with my new love.  And it is not in any way ideal.  But someone holds my hand, just as I am now holding yours, and someone thinks about me and misses me, just as that handsome stranger outside the casino is surely thinking about you.  You understand love better than most, Alma.  Don’t let any academic knothead tell you otherwise.  Oh, you see?  I made you laugh.  Good for me.  Good for you.  Conduct yourself with a heart full of love, Girlfriend.  Display no colors, no adornments but your own.  There is no sin in knowing better. There is no sin in survival. 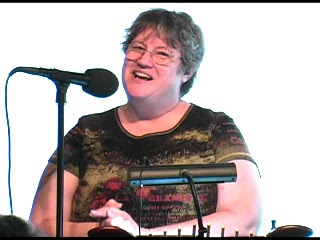 Los Angeles native Amélie Frank has authored five poetry collections, including Doing Time on Planet Billy Bob (Inevitable Press). Her work has appeared in numerous local, national, and international publications, including Art/Life, Lummox Journal, poeticdiversity (which nominated her for the 2016 Pushcart Prize), Blue Arc West, Sparring with Beatnik Ghosts, Levure Litérraire, Edgar Allan Poet, Cultural Weekly, and Wide Awake. Co-founder of the Sacred Beverage Press, she produced the acclaimed literary journal Blue Satellite.  She has been honored by Beyond Baroque Literary Arts Center, the City of Venice, and the City of Los Angeles for her activism and leadership in the Southern California poetry community.  She earned her degree in Creative Writing at U.C. Irvine and has served as a curator and trustee with Beyond Baroque, the Newer Poets Series, and the Valley Contemporary Poets. Nowadays, she is all about resistance, chocolate almond milk, Creepypastas, and being in love.