Lush pastures roll out
wildflower-patch quilts
as eye soothing sheep flow
past my window,
the eucalyptus and manure scented air
blows in,
and then
(I’m almost there)
misty brine,
and the guilt and loss I carry
tastes like sand in wine.

At the overlook
salt-laced wind slaps my face
as the tide’s thunderous rage
chews the cliff scape
inch by inch
into new shapes,
as the years have chewed
my inner landscape.
I climb down barefoot
to pace a gentler beach:
this briny repository of secrets

I’ve doled out slowly over the years –
a lover in jail
the death of a friend
the beginning of an affair
the end of an end –
these resilient waves never fail to soothe me
with their sibilant liturgy:
pardon
and peace
pardon
and peace.

At night the sharp stars
sting
like grit in my eye
and the surf’s soft caress
sounds like your absence –
breathing in
breathing out
breathing in –
while the cant of foghorn
absolves me
of every sin. 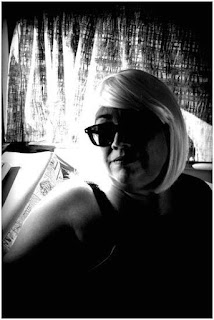 Cynthia Linville, a 2012 Pushcart nominee, has taught writing in the English Department at California State University, Sacramento since 2000 and has served as Managing Editor of Convergence: an online journal of poetry and art since 2008. Her work has appeared in many publications and several anthologies, and her two poetry collections, The Lost Thing (2012) and Out of Reach (2014), are available from Cold River Press. She invented a poetic form dubbed the Linvillanelle which is profiled here: http://medusaskitchen.blogspot.com/p/calliopes-closet.html.
Posted by Marie C Lecrivain at 11:57 AM