Some memories of events in childhood last forever, even those that didn’t seem
to have special significance at the time. Such an event occurred in the spring that I
was six years old, on a Sunday, two days after my 6th birthday. Early that morning,
we, my dad, mom and my sister, piled into my dad’s pride and joy, a two tone grey
Nash 600 sedan, and started on the road to Hyde Park, New York to see the estate
of former President Franklin D. Roosevelt. Of course at 6 years old, this didn’t
mean a thing to me; I was happy riding in the car and feeling the wind on my face.


Finally, after what was probably two hours, we arrived at this beautiful estate –
I’d never seen a house so big; it had rolling green lawns and huge trees and
magnificent colorful flowers everywhere. This was the Springwood estate, the home
of the former President and home to first official US Presidential Library, which all h
ad been donated to the State of New York in 1943 by FDR, making it a historical site;
it was opened for public tours after his death in 1945 and Eleanor’s move, at the
insistence of her mother-in-law, to the Val Kill cottage a couple of miles away.

This is, in my six-year-old memory, how I remember the rest of that day.

Dad parked the car and we got out and walked over to a large group of people;
a man was talking to them and he waved to us and said, “Come up front so the kids
can see,” which of course we did. I, being extremely bashful, was hanging onto
my dad’s pant leg and sort of hiding behind him. As we walked along, the man
was talking about the gardens and the trees and about the big house but I wasn’t
really paying close attention to what he said as much as the stuff he was pointing
to – it was all so pretty and colorful and big.


After we’d been walking for a while, we stopped and were listening to what the man
was saying and all of a sudden, everyone started clapping as a very tall old woman (at l
east she looked old to me) walked toward us. She stood next to the man, who smiled
and kept on talking and she surveyed the crowd.

She said “Hello,” to my mom and dad and my sister and then noticed me hiding
behind my dad’s legs holding onto his pants. She got down on one knee in the grass
so her big face was at the same level as mine – she had a mop of curly gray hair, and
big yellowish teeth and a kind face with lots of wrinkles like a prune but she had these
really soft blue eyes that were all smiley and twinkly; she smiled at me with
her big teeth and whispered “What’s your name?”

“Judy,” I whispered back, moving further behind my dad.

“My name is Eleanor. Would you like to walk with me, Judy?” she said,
holding out her hand. 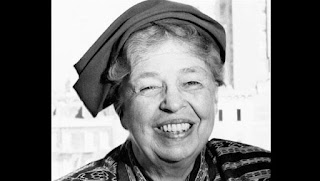 
they heard and they both nodded as the lady stood up, patiently waiting for my
answer. I looked up at her – she was taller than my dad and the other man too – she
was still smiling and she nodded to me and held her hand out again and I reached
up for it and stepped out from behind my dad. She took my hand and we started
walking and she began telling the people about the big house as we headed toward it.
She never let go of my hand and she kept looking down at me to let me know she
didn’t forget I was there and we walked all through the house like that with the people
following us - me and the big tall pruney faced lady with the soft eyes. At the end of
the tour, everyone said, “Thank you,” and then left.

She and my mom and dad and my sister too, talked for a few minutes and when
she said goodbye, my mom and dad said “Mrs. Roosevelt, it was really a pleasure
to meet you,” (with a reverence I’d never before or since heard in their voices).

That confused me because I didn’t know who Mrs. Roosevelt was – this was
“Eleanor.” The lady gave my sister a hug and I was just standing there, bashful a
nd confused; my mom said: “Judy, say goodbye to Mrs. Roosevelt.”

I looked up at the tall lady, almost in tears in my confusion and started to say,
“Goodbye Mrs. --” She smiled and shook her head, and I broke into a grin and
said “Goodbye, Eleanor,” and then ran into her outstretched arms for a big hug.


The epilogue to this story is that for months I begged my folks to take me back
to see Eleanor. They never did and it was many years before I realized who my
friend Eleanor was. 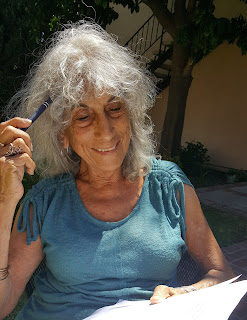 Bio: Judy Barrat is a writer of poetry and prose and has presented her work at many
poetry venues around Los Angeles, sometimes as the featured poet, as well as at music
venues, occasionally with a vocalist weaving a song around one of her poems. She
has performed three sold out shows of her stories and poems with musical
accompaniment at The Gardenia Club in Hollywood. Judy’s writing has been
published by the Pelham Parkway Times, the San Gabriel Valley Quarterly,
Spectrum (several issues), World Enough Writers, Quill & Parchment, and in

the Wild Women of Words Anthology.

Posted by Marie C Lecrivain at 8:01 AM